What if the pursuit of justice is the cause of human suffering…not the cure?

In SUING FOR PEACE, Attorney James Kimmel, Jr. chronicles his remarkable journey from bullied teenager on the verge of gunning down his tormentors in rural central Pennsylvania to high-powered Ivy League lawyer and then into a profound moral crisis that left him questioning whether the pursuit of justice — individually and as a society — is the cause of human suffering rather than the cure we have been led to believe. After years of legal and spiritual study, observation, and reflection, Kimmel became convinced that seeking justice almost never leads to the outcome we seek — peace and happiness — and only makes conflicts worse. The unexpected solution he arrives at is as ancient and timeless as it is original and inspiring.

IN THIS UNCOMMON BOOK OF LEGAL AND SPIRITUAL WISDOM, Attorney Kimmel draws upon the teachings of the world’s great religions and spiritual leaders (many of whom, Kimmel points out, studied law such as the Apostle Paul, Martin Luther, William Penn, Mahatma Gandhi, and Muhammad Iqbal) to explain how the term “justice” has come to have two very different meanings — revenge vs. equity — and that these opposite meanings easily mislead us into excusing, and even sanctifying, our personal and corporate acts of retribution, violence, torture, terror, and warfare — all in the hallowed name of “justice”.

A CO-TRAVELER IN THIS ALARMING STORY IS “JUSTICE ADDICTION” — the term Attorney Kimmel uses to describe the compulsive, uncontrolled seeking of revenge in the guise of justice that seems to afflict not only millions of individuals but our entire society, as evidenced by the 36 million lawsuits we file against each other in the United States each year; the $650 billion we spend on our civil, criminal and military justice systems; the frequent acts of revenge-driven street violence we experience; the more than 2 million people we incarcerate in our prisons; our obsession with entertainment and news stories about justice, crime and punishment; and our relentless recent wars waged “to bring the terrorists to justice.” These are all, Kimmel observes, patently self-destructive compulsive behaviors — costing us incalculable sums in lives and treasure — that not only mimic the self-destructive compulsive behaviors of addicts but that have been scientifically demonstrated as such by recent brain imaging studies showing, ominously, that the same pleasure centers in the brain that activate when a drug addict is taking heroin also activate when a wronged person is taking revenge.

JUST AS PHYSICIANS have recently discovered a deep connection between spirituality and medical outcomes, so Attorney Kimmel has discovered a deep connection between spirituality and legal outcomes. That connection is this: The more we seek justice in the form of revenge rather than equity, the more bitter and spiritually, emotionally, and materially impoverished we become. Winning an argument, a lawsuit, or a war at the expense of our financial, emotional, and spiritual well-being and happiness is not a victory. It is a resounding defeat. Only a people in denial, caught in the fierce grip of addiction, would not recognize this. Like addicts, we continue to disregard and discount the disastrous side-effects of seeking justice while vastly overestimating the short-term benefits  (“highs”) we receive.

THE MOST IMPORTANT TRIALS OF OUR LIVES, Attorney Kimmel concludes, are therefore the trials of our enemies, not ourselves. During these trials — in which we serve as witness, judge, jury, jailer, and, sometimes, executioner of the people who wrong us — it is our freedom that is ultimately at stake, not our enemies’. We must choose during these trials whether to pursue justice or happiness.

THE SECRET to winning these trials and resolving life’s conflicts is to stop suing for justice against our enemies and start “SUING FOR PEACE“. We do this by practicing what Attorney Kimmel calls “nonjustice” — the missing middle step between Gandhi’s idea of nonviolence and the spiritual necessity, found in all of the world’s great religions, of forgiveness.  But this is not forgiveness by a vengeful God of humanity, or forgiveness offered to ease the conscience of murderers. Rather this is forgiveness practiced out of sheer necessity as the only truly effective means of self-healing available to the wounded and victimized to bring about the restoration of their peace and happiness. No power on earth, Kimmel concludes, and certainly not justice in the form of revenge, is as potent as the power of forgiveness to obliterate the suffering of the past and to restore peace and happiness to the present and the future.

“A NINETY-FIVE THESES — NAILED TO THE COURTHOUSE DOOR”. When Martin Luther nailed his Ninety-Five Theses to the door of Wittenberg Church in 1517, he launched the Protestant Reformation. With SUING FOR PEACE, Attorney James Kimmel, Jr. creates a Ninety-Five Theses for our time, nailed to the courthouse door in the hope of launching a much needed legal reformation. 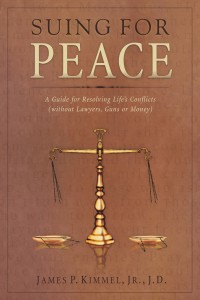