“Centuries and wars precipitated the separation of law from religion and church from state. In the process, we were freed from the abuses of religious tyranny. But this does not mean that separating law from spirituality is desirable — or even possible. Or that a new form of tyranny has not risen up to threaten us.” — James Kimmel, Jr.

James Kimmel, Jr. is a leader in integrating law and spirituality. Here’s how, and why it’s important:

The Essential Relationship Between Law And Spirituality

Law is that set of man-made rules that orders relationships between our separate physical bodies and mediates conflicts between them.

Spirituality refers to that unseen which is common to and unites the whole of humanity despite our separate physical bodies and circumstances. We might also call this a sense of transcendent oneness. Whether this sense emerges from a creator/deity or the human psyche alone need not delay us long, because the simple fact is that this sense is experienced by most humans — atheists and believers alike. [See, e.g., William James, The Varieties of Religious Experience: A Study In Human Nature]  As such, the topic of spirituality is broader than and differs from religion, which seeks to understand and direct the experience of matters of spirit through a particular lens of organized human institutions and systems of creeds, rituals, beliefs, and worship practices.

Law and Spirituality are thus bound up with each other at a fundamental level. Although law focuses on our separate bodies and spirituality focuses on that unseen which unites us, they are interactive and mutually dependent constructs because human experience is, paradoxically, that of being at once both separated and united. Accordingly, one tends to find peace and happiness flourishing where spirituality (unity, oneness) is supported by law and where law, although carefully defined to protect the individual, is infused with an awareness of the individual’s concomitant spirituality (unity, oneness). On the other hand, one tends to find strife and warfare where law denies or is in conflict with spirituality, or where spirituality has lost its legal support.

The Dangers Of Separating Law And Spirituality

In the United States, we have become so successful at separating law from organized religion that we have undermined the essential supportive relationship between law and spirituality.

This becomes manifest in our national obsession with using law as a socially acceptable means of seeking revenge against those who wrong us. Instead of using the law to unite us with each other (to experience oneness), we often use law to conquer and divide.

The word “justice” itself, which means equity and fairness (the manifest state of oneness, or spirituality), is often used in our society and by our leaders as the politically-correct synonym for revenge, retribution, payback, and vengeance — the manifest state of separateness that is the exact opposite of equity and oneness (spirituality). In other words, the relationship between law and spirituality in our society is broken.

As a consequence, we experience heightened levels of conflict and strife — in our homes, schools, businesses, communities, and within the world around us. Why? Because instead of our legal system supporting oneness, it is often dedicated to justifying, rewarding, and sanctifying separateness and our most base instincts to seek revenge against others when wronged.

To learn more about the enormous individual and societal costs of justice-seeking, click on Suing for Peace.

The Rise of A Secular Religion: The Justice System

Not only has the broken relationship between law and spirituality led to conflict and violence, but it is having the unforeseen and quite paradoxical effect of elevating the Justice System to the status of a state-approved secular religion.

Look closely and you will see a striking resemblance. Lawyers now function as the secular priests of our society and judges as the popes and prophets — offering justice to the masses who turn to them for deliverance in times of crisis. We erect great temples in which to practice and worship justice (courthouses); we devise complex, sacred liturgies to be carried out in these temples (oaths, legal creeds, Latinate rules and incantations of procedure); we require sacred vestments of our legal clergy (judicial robes and dark suits) and address them with holy titles (“Your Honor”); we train our legal clergy in special seminaries (law schools); we even empower our lawyers and judges with the authority once held by religious clergy to bestow and withhold punishment, penitence, property, freedom, salvation, and even life itself. Viewed up close, our justice system looks and behaves increasingly like the Church in the days before the Protestant Reformation, at times rife with abuses and demanding payment for priestly indulgences of our sins and supplications. Ominously, this secular religion is bound together with and sanctioned by the state as the one true and acceptable faith of the nation.

Restoring The Relationship Between Law And Spirituality

The time has come to restore the relationship between law and spirituality — and to end the rising tyranny of the revenge-based Justice System as a secular religion.

Like the Protestant Reformation, the reforms required of the legal system will come directly from the people.

First, people must begin to demand peace and happiness when they have been wronged, rather than justice in the form of revenge. To sue for justice in the form of revenge is to sue for conflict and disunity. Instead, we must begin to learn to sue for peace and reconciliation. We do this in the first instance by creating space in the law for the possibility of forgiveness — the polar opposite of revenge. We are not talking here about forgiveness to make a transgressor feel better, but forgiveness to heal the victim by stopping the traumas of the past from infecting and destroying the present and the future. Is it not striking that in all the vastness and complexity of our legal systems, in all of the statutes and rules that have been promulgated and in all of the case law and legal briefs that have been written, the essential element of forgiveness by which all conflicts are permanently resolved is barely mentioned, let alone practiced?  Even the power of the pardon — the ancient last vestige of forgiveness left in the law, by which the President and governors may forgive wrongdoers — has been virtually eliminated because of the public’s blind thirst for vengeance at all costs. To reform the legal system, we must create an honored place in the law for the possibility of forgiveness.

Second, people must begin to demand that attorneys help them win peace and happiness when they have been wronged, rather than win only revenge. In Mahatma Gandhi’s words, we need to demand that our attorneys work harder at uniting us when we have been riven asunder, rather than tearing us farther apart. This can be accomplished by insisting that our attorneys act as peacemakers, not mercenaries. Lawyers will do what their clients demand. This means that clients bear as much responsibility for the current state of affairs in the justice system as do lawyers. But because of their special training and position of trust, lawyers have a special duty to help their clients, and their profession, bring about needed changes.

Third, people must begin to look beyond attorneys and judges (or worse, guns) to resolve their disputes. To paraphrase a famous song: lawyers, guns and money are not necessary for resolving conflicts.  Forgiveness is free and available to all. But forgiveness is not always easy. The problem is that we have only created a revenge-based Justice System to resolve conflicts.  We as a society have not bothered to create a “forgiveness system”. Until now, that is. An alternative “Nonjustice System” exists on the Internet — a free mobile app for resolving disputes and restoring peace and happiness, available to all at the Miracle Court website: https://www.miraclecourt.com. The Miracle Court Nonjustice System reunites law and spirituality. 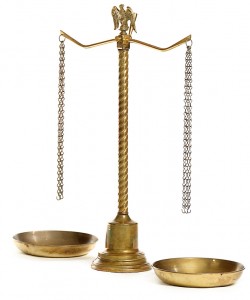 The Scales of Justice always hang in perfect balance when we cut the chains and stop weighing the wrongs of the past.